It’s one of those classic things – the minute you’re interested in something, you start seeing it everywhere.

Channel 4 in the UK aired a program about little kids participating in rodeos called, “Unreported World: America’s Cowboy Kids“. Training the next generation of cowboys and cowgirls… And keeping the “Western” way of life in the family. It reminds me a bit of children’s beauty pageants – except a lot more dangerous. I wonder who this is for, the parents or the kids? The potential prize money can’t hurt either. Another interesting economic aspect is the commercialization of non-human animals – breeding bigger, stronger bulls is big business and has the potential to change the sport in the coming years.
Takeaway #rodeomasculinities message: “Don’t cry in the arena.”

BBC Radio 4’s program, “The Forgotten Black Cowboys,” explores issues of white-washing Western heritage and legacy and highlights the contributions and participation of ethnic minorities in rodeo. It appears to be a case where fiction has informed mainstream imaginings of this culture rather than fact. Hollywood once again has a lot to account for in terms of misrepresenting multiculturalism.

This New York Times piece about rodeo came out when I was out at the rodeo, which was not only great timing, but also very interesting and informative. It’s all coming up ‘rodeo’ at the moment….

“The Ride of Their Lives”

Sifting through photos and video, reflecting on field notes, transcribing interviews, and one of the main themes that keeps emerging is support for youth education. This was a message that Rodeo Austin kept delivering – on the tickets, on signs throughout the fair site, at the souvenir shops, on screens during the rodeo, all over their website and social media. “Benefiting Texas Youth” is the message. 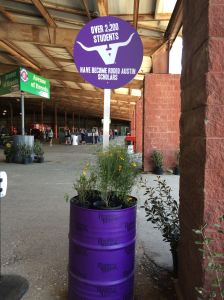 The Austin Rodeo is one of the larger scholarship programs for Texan youth to attend university in Texas. From the look of the website, there appears to be a good amount of diversity and gender equality in the recipients of the scholarships. The website says that since its inception in 1981, Rodeo Austin has awarded $6.5 million in scholarships.The Directors I interviewed were proud of this aspect of the rodeo and want to make sure everyone knows about it, which is why it is promoted so much. Each year, 50 students are selected, and they award $500,000 in scholarships.

I’m a bit cynical and wondered how much of this was window dressing for the event – a charitable excuse to remain relevant in current society. However, after speaking with an expert in event scholarship funding, I can now understand how non-profit scholarships are very important for students, who may not be at the tippy-top of their class academically, but are driven, smart and deserve a chance to attend university. Also, she said it was important for supporting degrees which may not be funded as much anymore, such as agri-business, equine science, and other agricultural/animal-related majors. Although students do not have to study these disciplines, rodeos provide one of the few scholarship schemes focusing on these areas in order to give young people a chance to pursue their interests academically. Other rodeos across Texas also have scholarship programs, such as the Houston Livestock Show and Rodeo, Heart of Texas Fair and Rodeo, San Antonio Stock Show and Rodeo, Fort Worth Stock Show and Rodeo, to name a few.

There’s a lot of chatter about ‘community outreach’ and ‘social inclusion’ and ‘civic boosterism’ in the events literature and among events scholars. It’s refreshing to see an actual event that puts its money where its mouth is.

What a fantastic research trip to the Rodeo! I’m still sorting through data, reflecting, coding, analyzing, etc. etc. So, watch this space… However, if you’re interested, here’s a link to some of the photos that make up my visual ethnography:

Lots of food products on sticks

My friend and research partner, Dr Kate Sang, introduced me to post-humanism and the writings of Braidotti. It’s been one of those things where I knew nothing about it, and then once I did, it started turning up everywhere. My colleague, Dr Paula Danby, is also interested in post-humanism for her work on equine tourism, and we’ve had some interesting chats about rodeo and non-human animals. Although my initial conceptualization of this research didn’t include a focus on non-human animals, I’ve become very interested in this dimension and also think it could inform a wider piece of research in the future.

In terms of rodeo, non-human animals feature in mainly three roles: 1) show (stockshow), 2) performance (sport events), 3) work. It will be interesting to see the treatment of these animals and the ways humans interact with them/the relationships between the species. In other words, the social construction of masculinities in relation to the non-human animals.

For example, in the performance side of the event, masculinity seems to be linked to the size and type of non-human animal. For example, bull riding is seen as the top echelon of ‘macho’ performance given the size and fierceness of the animal. Mutton busting is for children and could be seen as a training ground.

“A cowboy is a man with guts and a horse”

The mythic idea of the cowboy and his horse is also at the core of ‘cowboy culture’. They are viewed as a team. This brings up interesting post-humanism dimensions of human and non-human animals having to think and work together to survive. The horse was often the main companion of the cowboy on the range, and there was a reliance on each other. The attitudes and behaviours of cowboys towards their horses is worth further exploration… A few questions arise:

– What benefit does the non-human animal get out of rodeo? Or, is it about serving humans?

– Is the non-human animal a ‘tool’ for the human? Is it a symbiotic relationship or one of human dominance?

– Are these relationships gendered? Do men treat non-human animals differently than women at rodeos?

Men and horses bring up different images than women and horses in this context. Paula reckons women are more maternal and caring towards horses, viewing them more for kinship, while men treat them as ‘tools’ for their own glory and prestige. This can be understood socio-culturally as well as financially. She suggests that horses in sporting events such as rodeo may be seen as a means to an end for men, a reflection on their sense of selves and status, especially when prize money is at stake. This is a fascinating dimension of gender, identity, image, and commercialization tied up with non-human animals. It is something I want to explore further.

In terms of gender and non-human animal treatment, I chatted with my stepsister, Ryan, who works with horses, about rodeo. She reckons rodeo is male-driven and stereotypically alpha man ‘macho’, so it is a very different environment and treatment of horses than other equine sports, such as show jumping. In show jumping, there is more gender balance with riders and often more women often compete than men. Paula also suggests that previously a lot of equine events at professional levels were more male dominated; however, this is now becoming more gender balanced, as equestrianism is the one of the only sports (if not only sports) that men and women actually compete against each other equally. Indeed, Dr Kate Dashper has also published on equine sport and dressage in terms of gender and culture.

There have been protests and controversies by animal rights activists surrounding rodeo. The main controversy is with the bucking broncos, where a flank strap is tightly tied around the horse’s lower belly to cause bucking.

Ryan reckons that there are oversights on this, as it is a regulated sport which takes place in public during a competition. She also notes these performing horses have lighter work schedules than other working horses.

Ryan also stresses there is oversight for these events, as most policing happens within the sport itself. She also mentions that it is a spectator sport, so the audiences would not stand for cruelty in this public arena. Event managers and owners are sensitive to spectators’ feelings about animal welfare and more likely to address it. She suggests being spectator-driven contributes to oversight and fewer problems. The marketing materials for many rodeos stress this animal welfare message as well.

Overall, post-humanism represents a change in thinking of humans as more important and dominant over non-human animals. It will be interesting to see if rodeo has caught up with this.

I heard back from the Texas Director of the Women’s Professional Rodeo Association (WPRA) today about interviews. I’m looking forward to seeing women compete at the Austin Rodeo and observe how they are received and treated in this macho arena. My previous research on women boxers at the London 2012 Olympics is informing my conceptualization of this; however, I do acknowledge that cowgirls have their own history and narrative.

Theoretical frameworks include Bourdieu‘s conceptualisations of male domination and symbolic structures in social life and Butler‘s work on perfomativity of gender. Perceptions of women athletes, especially those who participate in violent or traditionally macho sport, are, according to Lenskyj, socially constructed within culture and through cultural discourses. As Woodward argues, “Possibilities of re-thinking gendered identifications within sport… might also disrupt some of the performance of hegemonic masculinity.”

In other words, male athletes are seen as the default, and women athletes are either seen as space invaders or having to work harder to meet the male standard. I would argue the media is complicit in this, as most press coverage is about men in sport, and women are usually judged not by athletic ability but by aesthetic appearance. This also translates to money – women make much less in sport and sponsorship. It will be interesting to see what rodeo has to offer in this regard.

There are many myths surrounding women in the Wild West – helped along by the musicals, Annie Get Your Gun supposedly about Annie Oakley and Calamity Jane loosely based on Martha Jane Canary. Currently, I’m reading Cowgirls: Women of the American West by Jordan to get a sense of the history and contribution of women to Western culture. In many respects, women, or at least white women, seem to have more of an accepted place in this Western ideal than gay or ethnic minority men. Their role as pioneers and partners appears to be more understood and defined (usually as a complement to men and in a family context).

What may need further investigation is the juxtaposition of women rodeo riders vs. women beauty queens. Rodeo queens are still a thing – and a big deal. Keeping with Butler’s ideas, beauty queens are archetypes of performing femininity with their sparkly dresses, make up, and big smiles. Whereas, rodeo riders are not necessarily seen as typically feminine because they are participating in a traditionally manly (dangerous, dirty, powerful) tasks. For these reasons, beauty queens could be the most culturally acceptable roles for women in rodeo. Interestingly, Austin’s rodeo has their queen contest at a separate time, so it is not part of the rodeo events. I’m sure this was done on purpose, so I’ll need to find out the rationale behind it. My undergrad dissertation was on beauty pageants, so it is a fascination for me, and I’m trying desperately not to get sidetracked by it!

John Oliver can have the last word on beauty pageants…